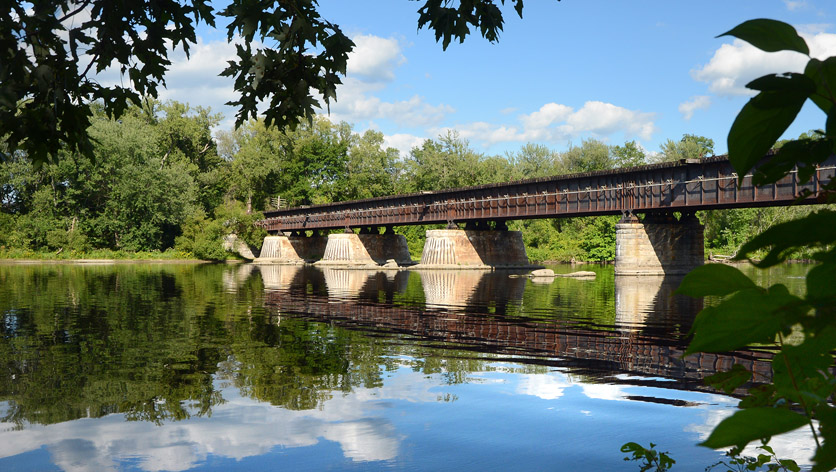 How We Got Here

PCBs, or polychlorinated biphenyls, are a class of stable chemicals consisting of 209 individual compounds. PCBs were widely used for fire prevention and as an insulator in transformers and capacitors because of their ability to withstand exceptionally high temperatures. They were also used in a variety of other industrial applications, including paints, newsprint, pumps and motors.

Beginning in the 1940s, GE used PCBs as an insulating fluid in electrical capacitors manufactured at two plants along the river in Hudson Falls and Fort Edward, N.Y., about 50 miles north of Albany. When available, the company held valid permits to use and discharge the compound to the Hudson River, but discontinued its use in the mid-1970s when PCB use was phased out in the United States.

Most of the material that was discharged to the Upper Hudson, including PCBs, accumulated behind a dam south of GEâ€™s Fort Edward plant. In 1973, the owner of the dam demolished it and the material that had built up behind it washed downstream, settling in sediments.

EPA classified the Upper Hudson River as a Superfund site in 1984. After assessing environmental conditions in the river, EPA issued a Record of Decision for the site rejecting dredging and recommending certain areas on land (known as remnant deposits) be covered with clean material. GE performed this work in the 1990s.

EPA spent 12 years evaluating all of the data on the Hudson River before deciding that dredging was the appropriate environmental remedy. The agency considered ordering an even larger dredging project at that time, but concluded that the negative environmental and community impacts from a larger project would outweigh any environmental benefits. EPA has reviewed and reaffirmed its decision on the scope of dredging as recently as 2012.

Immediately following EPAâ€™s decision, GE committed to cooperate with EPA on the Hudson River PCB cleanup. GE collected thousands of sediment samples to determine which specific areas would be dredged and assembled a world-class team of environmental engineers and dredging experts to plan, design and conduct what was one of the largest and most logistically complex environmental cleanups in U.S. history. GE also leased more than 100 acres of farmland in Fort Edward, N.Y., for a massive PCB processing and transportation facility that GE built there to support the work.

The first phase, or first year, of dredging was performed in 2009. Subsequent seasons of dredging were performed from 2011-2015. As a result of the work, the majority of PCBs in the Upper Hudson â€” more than 300,000 pounds â€” have been removed. The volume of sediment removed would fill the Empire State Building twice. Dredging was conducted around the clock, six days a week, six months of each year. The project has been hailed by EPA as â€śa historic achievementâ€ť and â€śenormously successful.â€ť EPA has determined the project is meeting the rigorous environmental protection goals it set.

Although dredging activities are completed, GEâ€™s work on the Hudson River will continue. GE will collect water, sediment and fish data on the Hudson to evaluate the impact of the cleanup. The data will be used to determine, for example, whether PCB levels in fish have declined as quickly as forecast and to establish the overall rate of recovery. GE also will continue the cleanups of its Hudson Falls and Fort Edward, N.Y., plant sites â€” cleanups that representatives of the New York State Department of Environmental Conservation say have eliminated the sites as significant sources of PCBs to the river. Finally, GE will continue a comprehensive evaluation of river shorelines to determine whether PCBs are present at levels that pose risk to human health and the environment and, if so, how best to address them.