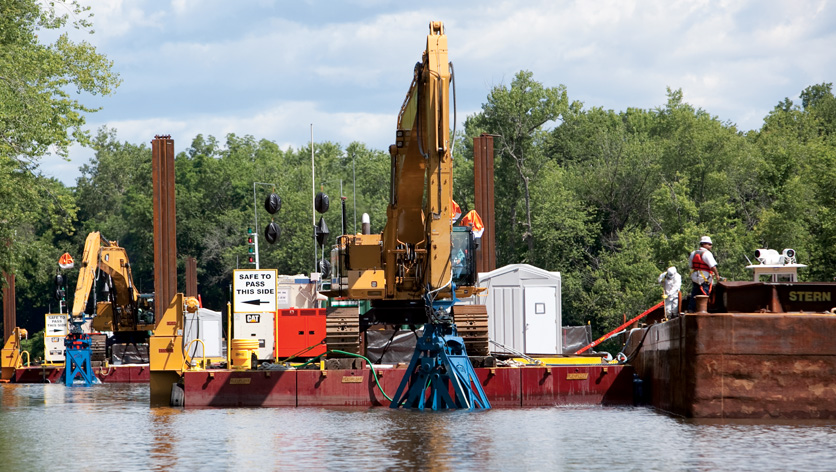 How Dredging Was Performed

The dredging of PCBs from a 40-mile stretch of the Upper Hudson River was one of the largest and most logistically complex environmental dredging projects ever undertaken in the United States. The work was performed 24 hours a day, six days a week, for six months a year for six years, with constant oversight from both EPA and the state Department of Environmental Conservation.

Sediments were removed from the river bottom by mechanical dredges, and loaded onto hopper barges. The barges were pushed by tugboats to a processing, treatment and transportation facility GE constructed for the project on the Champlain Canal one mile upstream from the Hudson River.

At the facility, free water was pumped from the barges and large debris was removed. Sediment moved through size-separation equipment to separate out debris, gravel, rocks and sand. Water was extracted from the finer sediment in a 41,000-square-foot sediment dewatering building. The resulting cake-like substance was loaded onto railcars for disposal at permitted waste disposal facilities in Texas, Idaho, Utah, Oklahoma, Ohio and Michigan. Water was treated at an on-site water treatment building.

Following the end of dredging, the facility was decontaminated and decommissioned, with EPAâ€™s approval and oversight.