Enclosed are the comments of the General Electric Co. on the Proposed Second Five-Year Review (Second FYR) Report for the Hudson River sediment remedy.

The Hudson River dredging remedy remains one of the largest and most logistically complex environmental cleanups in U.S. history. Together, GE and EPA removed significantly more PCBs than projected, while also mitigating potentially adverse impacts to the fullest extent practicable. That is why, at the completion of the dredging in 2015, EPA aptly described the project as an ‚Äúhistoric achievement‚ÄĚ and declared the project to be ‚Äúextremely successful.‚ÄĚ EPA‚Äôs Second FYR Report reaffirms those conclusions and that the Hudson River dredging project is on course to achieve EPA‚Äôs goals of protecting human health and the environment. GE is proud to have completed this unprecedented project that EPA selected, New York State endorsed, and both oversaw, and GE is proud of the environmental improvements that have been achieved so far, the result of a very productive working relationship.

The data collected to date, and summarized in the Second FYR Report, demonstrates that the remedy‚ÄĒchosen by EPA with the concurrence of New York State‚ÄĒis reducing PCB levels as planned and shows why no additional dredging in the Upper or Lower Hudson is recommended or warranted. In the first 12 months since GE completed the $1.7 billion dredging project, PCB levels in water in the Upper Hudson declined at every monitoring station and by as much as 73 percent. PCB levels in fish are near or below pre-dredging levels, as EPA projected. These results indicate that environmental conditions have responded to the remedy and are improving just as EPA projected they would.

The purpose of a Five-Year Review, as EPA‚Äôs guidance explains, is to assess whether the selected remedy is, or will be, protective of human health and the environment by evaluating whether it is functioning as intended and whether the assumptions underlying that remedy remain valid. Consistent with that guidance, EPA reviewed all of the data collected since 2002 and determined in the Second FYR that the remedy was implemented correctly and is functioning as intended. That determination is consistent with the expectations EPA set forth in its 2002 Record of Decision (ROD) and with its First Five-Year Review in 2012, in which the Agency concluded that the remedy would be protective of human health and the environment based on data and information at that time.

On the sole issue now before EPA‚ÄĒwhether the remedy was properly implemented and working as intended‚ÄĒthere can be no real dispute. The enclosed comments demonstrate the many ways in which the project‚Äôs substantial technical record fully supports EPA‚Äôs analysis and determinations. As we show: 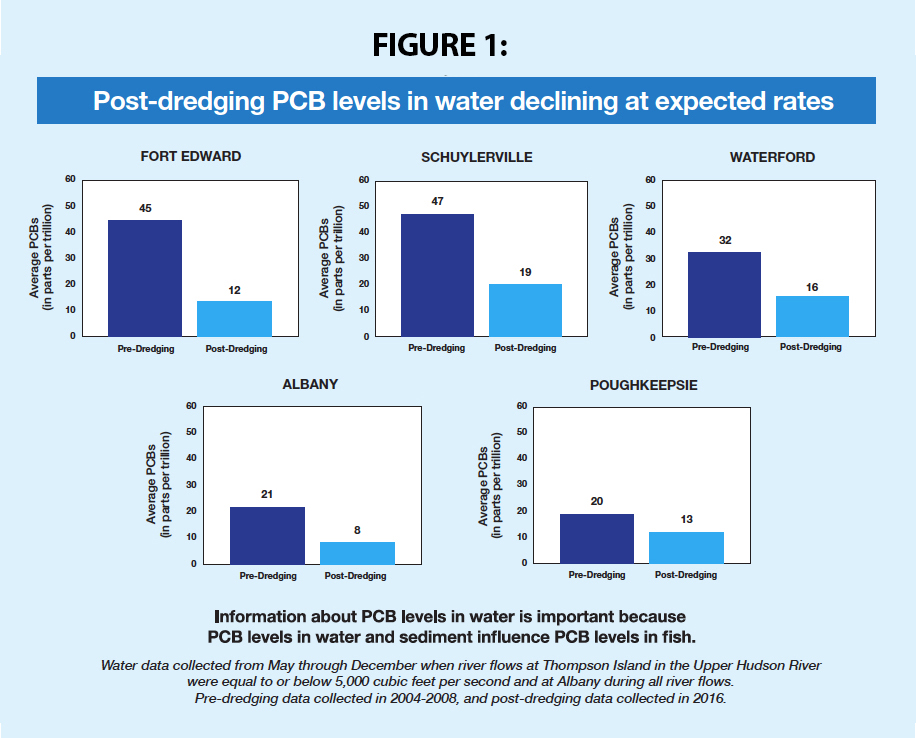 Notwithstanding the clear evidence supporting the ongoing success of the remedy, some parties have resurfaced old arguments and argued that EPA should order additional dredging, claiming that more dredging would more quickly achieve EPA‚Äôs goals. This claim is not supported by scientific evidence; nor is it properly a question for the Second FYR. At its core, this argument improperly seeks to have EPA go back to the drawing board, reopen the remedy selection process and select a different remedy. The sole question before EPA at this stage is whether the selected remedy was properly implemented and is working as planned. EPA has properly concluded that the answer to this question is yes‚ÄĒthe remedy was properly implemented and is working as planned, and the scientific data demonstrate that the dredging project is clearly delivering the environmental benefits that EPA envisioned.

Moreover, the calls for additional dredging fail to recognize that, in selecting the final remedy in 2002, and in multiple subsequent reviews, EPA considered the arguments being raised now and rejected them. EPA‚Äôs analysis has consistently demonstrated that additional dredging beyond the selected remedy will not deliver better results in a significantly shorter time frame. In fact, it showed that even the most extensive removal alternative would not be significantly more protective than the chosen remedy and would not appreciably reduce the number of years to achieve the same target levels, as shown on Figure 2. As EPA recognized in its 2002 ROD Responsiveness Summary, more extensive removal alternatives would ‚Äúgreatly increase costs while yielding little additional public health or environmental benefit,‚ÄĚ and would therefore fail Superfund‚Äôs critical requirement that every remedy selected must be cost-effective. 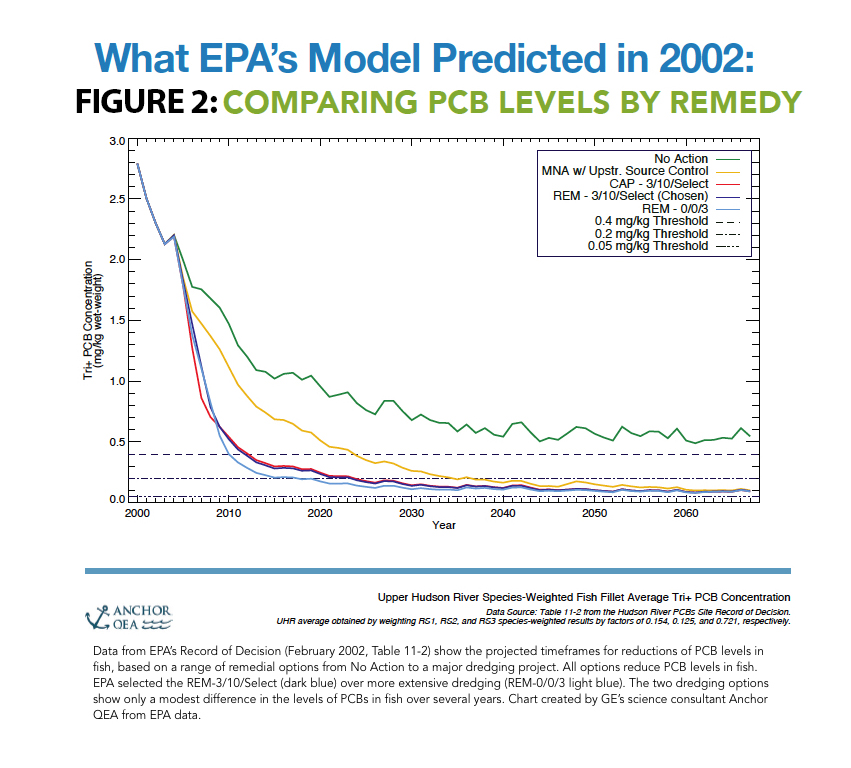 Some advocates for more extensive dredging have relied on a model developed by the National Oceanic and Atmospheric Administration (NOAA), which purports to show that fish in the Lower Hudson River will recover at a slower rate than predicted in EPA‚Äôs ROD. The NOAA model is demonstrably invalid for several reasons but chiefly because its results are inconsistent with actual, measured data‚ÄĒa critical test for determining a model‚Äôs validity and reliability. Its predictions for both fish and water are significantly higher than the actual data. For example, as shown in Figure 3, the NOAA model over predicts PCB concentrations in water by two to four times compared to actual measured data. 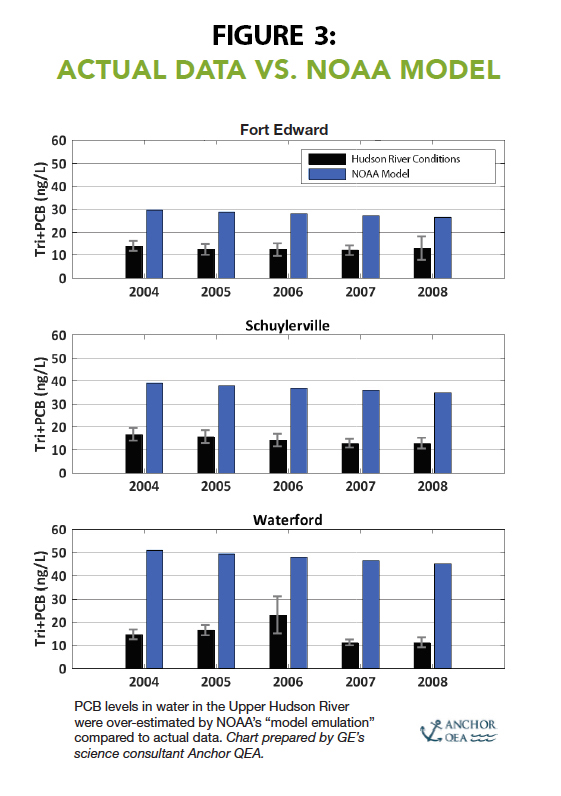 EPA has said that it expects the benefits of the remedy to become even clearer as additional data are collected over the next several years. An independent expert report prepared for the Hudson River Foundation concurs, recently concluding that many additional years of monitored natural recovery will be necessary to determine whether any additional remedial action is required.

The appropriate next step is the one the ROD envisions: the collection of scientific data to provide a sound basis for assessing the longterm performance of the remedy. GE will continue to work closely with EPA and New York State to complete this additional work. At this time, there is no justification whatsoever for additional dredging. The data demonstrate this remedy is working. As EPA has determined in its Second FYR, the remedy removed more PCBs than expected, is functioning as expected, and will protect human health and the environment. GE will continue to meet its commitments as it has during every stage of this process.

Please let us know if you have any questions about the enclosed comments.